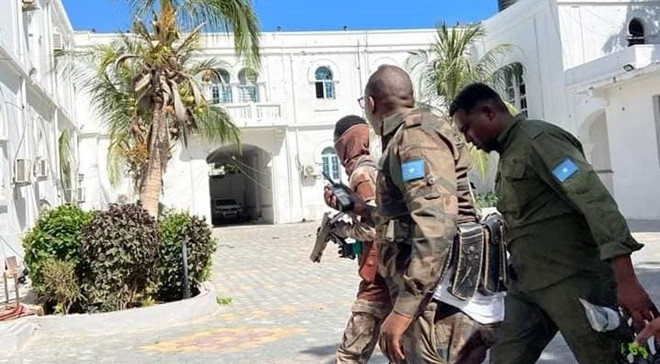 The six militants who were donned in what looked like Special forces' garments gained access at midday Mogadishu time in the company of a suicide bomber who detonated himself outside the building, sources noted. What followed was an intense fight with security forces on the site.

Five militants temporarily controlled the complex as security forces focused more on evacuating hundreds of civilians who were seeking services in the building which hosts Hassan Jimale, the Banadir regional governor who also doubles as Mogadishu mayor for the last three years.

It took security officers over six hours to end the siege, shooting dead the militants who were causing havoc on Sunday in the busy town. At least five civilians were killed instantly while four others were critically injured in the attack which has been widely condemned.

“At about 12 noon they hit the back gate facing Hamarweyne [district] with an explosion,” Deputy Mayor Isse Gure said while noting that the attackers walked to the building masquerading as members of the security forces.

At the time of the attack, Yusuf Hussein Jimale, the mayor of the town was not at the site since he was outside the country for official businesses. It is not clear if he was the target of the raid but Al-Shabaab usually targeted top government officials in such raids, along with innocent civilians.

“When the explosion happened, I was in Hamarweyne, not that far from where the explosion took place,” said VOA Somali stringer Abdiaziz Ahmed Barrow.

He said people were preparing for midday prayers at the time.

“We heard a huge explosion, it was a powerful one that shocked the people,” he said. “I saw people fleeing from the scene; the ambulances came to the scene. The security forces have arrived, and they have opened fire.”

“People I know were injured [in the attack], some of them [are] my friends,” he said. “I have seen some people with blood running away.”

In 2019, the Al-Shabaab targeted city mayor Abdirahman Osman alias Engineer Yarisow, who would later succumb to his wounds. The militants have been on the receiving end in the last six months, losing key strategic towns across rural central and southern Somalia.