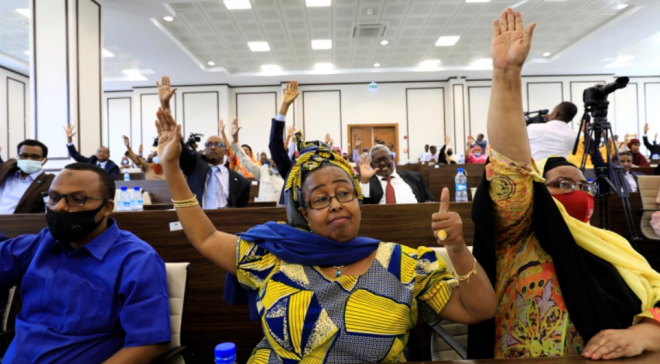 MOGADISHU, Somalia – The Lower House of Somali parliament voted on Saturday to give PM Mohamed Hussein Roble the power to spearhead preparations for the elections in the country amid squabble.

In a special session, the 140 lawmakers have voted in favor of the return to the September 17 electoral agreement between the Somali government and the Federal States that will allow for an indirect general vote.

The parliament has made the decision at the request of the outgoing president Mohamed Abdullahi Farmajo who addressed the house on Saturday to pass the election and security responsibility to PM.

The development comes as the country was on the brink of conflict after opposition candidates began mobilizing soldiers defected from the Somali national army who captured key areas around the palace.

The tension soared after the lower house MPs have unilaterally voted on April 12 to extend President’s term by two years in efforts to hold a one-person-one-vote election for the first time in 50 years.

The U.S. embassy in Mogadishu said in a Twitter post that Washington welcomes Farmajo’s decision and the House of the People, calling the elections to be held as soon as possible.

“We welcome the actions taken today by Farmajo and the House of the People. We also welcome PM’s role in implementing Somalia’s elections, which must be held as soon as possible,” said the US mission.

The disagreement on elections and the president’s term trigger armed clashes in Mogadishu last week, forcing 100,000 people to flee their villages, according to the UN OCHA office in the country.

The government forces have been fighting against rival pro-opposition militias in the capital, Mogadishu, in what the security analysts say gives Al-Shabab the opportunity to extend its grip in the country.

The international partners have called for calm and end differences through political dialogue with the U.S. threatened to impose sanctions and Visa restrictions on figures deemed as the election spoilers.