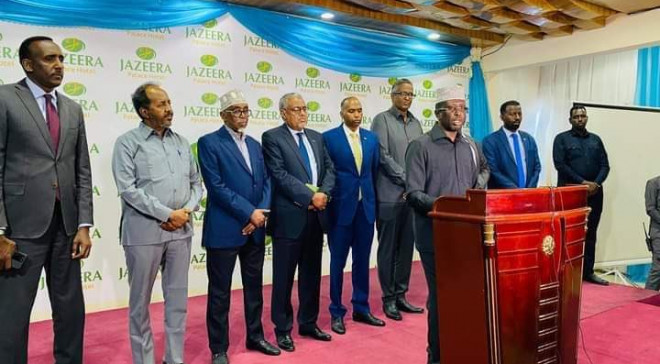 FILE PHOTO: Members of the Union of Candidates for the Presidency of Somalia

MOGADISHU, Somalia - The Union of Presidential Candidates [UPC] has called for a special meeting over upcoming elections, raising concerns about the exercise, with just a few days before the country goes for the much-anticipated polls.

The elections team has issued a statement over the elections, giving a final timetable which will be adhered to for peaceful conclusion of the exercise. The senatorial elections will start from July 25 before the MP elections which will be concluded by October 7.

In a statement on Sunday, the union which comprises 15 candidates said it was convening a meeting to discuss among others, the current political situation in Somalia ahead of the much-anticipated elections in the country.

The union expressed concerns that many issues surrounding the elections remain unsettled and could further delay the elections. According to the team, the country has not done enough to guarantee free and fair elections in the coming weeks.

The statement further throws the organizers into limbo given that the entire team has been questioning some of the decisions made by the electoral team. Previously, they had accused the government of imposing NISA agents in the presidential elections team.

Prime Minister Mohamed Hussein Roble, who has been tasked to conduct elections in Somalia, has been meeting various stakeholders in a strategy geared towards ensuring both parties are satisfied with the outcome. On Sunday, he met EU envoy Nicolas Berlanga and Norwegian ambassador Heidi Johansen.

"PM Mohamed Roble has held on Sunday separate meetings with the EU Ambassador to Somalia Berlanga and Norwegian Special Envoy Heidi Johansen and discussed with the country's election development and strengthening cooperation," his team said.

Outgoing President Mohamed Abdullahi Farmajo is keen to defend his seat but critics accuse him of manipulating state agencies in his favor. The opposition has particularly accused NISA boss Fahad Yasin of using his team to manipulate the poll outcomes in favor of the president.