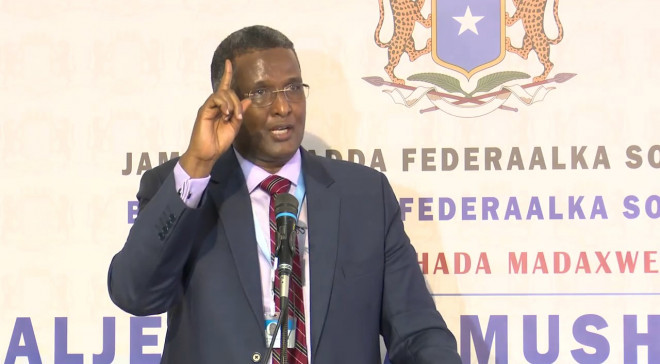 MOGADISHU, Somalia - The recently signed pre-election pact may still be in danger given complaints raised by Wadajir party leader Abdirahman Abdishakur Warsame, who is one of the key stakeholders in the upcoming polls, which will be presided over by Prime Minister Mohamed Hussein Roble.

A couple of weeks ago, various political stakeholders signed a pact in Somalia which would see the country hold elections after months of stalemate that saw both sides of the divide accuse each other of the delays. Farmajo failed to hold elections within the stipulated time.

But even after the signing of the agreement, Warsame seems to be dissatisfied with the process of removing suspicious elections committee members who the opposition had raised a red flag, arguing that the exercise lacks the transparency it deserves.

Already, a ministerial-level committee picked by Roble has identified 34 people of the 67 individuals accused by the opposition of being NISA agents, civil servants and, or agents of the state. The 34 people are set for removal but the opposition leader doubts the process.

The veteran leader says the process of vetting the names is still surrounded with mystery, adding that those who submitted the names were not consulted on the omission of other suspicious characters that the office of the PM wants to clear for the polls.

According to him, the federal government has persistently denied the presence of civil servants, NISA agents and Farmajo's sycophants in the electoral team, despite complaints raised by various stakeholders including the opposition.

"They acknowledge the existence of 34 members. It can be said that 20 per cent of their plan for the election committees has been exposed," added the Wadajir party leader, who has been at loggerheads with the current administration.

Ironically, it's only Abdirahman Abdishakur who has raised the complaints of all the opposition leaders who had initially commended the electoral deal that was signed in May by dozens of government critics. Former Presidents Sharif Sheikh Ahmed and Hassan Sheikh Mohamud are yet to raise issues.

But Warsame maintains that the opposition might be on the losing end should it fail to call for transparency in the reconstitution of the electoral committee which he insists would play a major role in rigging upcoming elections.

"They are planning to replace the 34 members with others who are not that different, given there has been no agreed-upon process for the vetting of the removed members or those who are going to replace them. If we do not correct the process today, we will regret it tomorrow," he said.

"Those who are celebrating today are going to be complaining tomorrow. We must not fall for illusions and lip service promises. We stand for insistence on finding an agreed-upon, fair, free and transparent process to implement the elections agreement."

The federal government is yet to respond to the explosive complaints from the veteran leader but had updated the progress of the exercise. The country is set to go for elections within the next two months according to the agreement which was signed last month.

"We believe that most of the members of the electoral committees who belong to NISA, especially the undercover members, still have a strong presence within the committees," he said. "We urge the PM to follow due process and use a transparent and impartial manner in addressing the concerns."