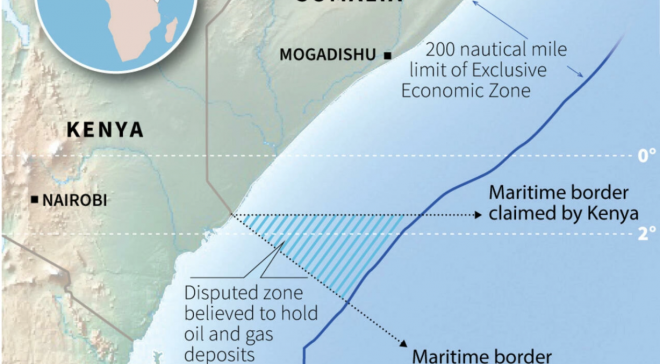 THE HAGUE - The UN's top court will rule in a bitter border dispute between Somalia and Kenya on Tuesday, delivering a verdict with potentially far-reaching consequences for bilateral ties and energy extraction in the region.

The International Court of Justice (ICJ), is to give its final word in a case filed by Mogadishu more than seven years ago.

A full bench of 15 judges led by US judge Joan Donoghue will hand down the verdict at the Peace Palace in The Hague at 1300 GMT.

At stake are sovereignty, undersea riches, and the future of relations between two countries in one of the world's most troubled regions.

Kenya has already lashed the ICJ as biased and announced it does not recognize the court's binding jurisdiction.

At the heart of the dispute is the direction that the joint maritime boundary should take from the point where the land frontiers meet on the coast.

Somalia insists the boundary should follow the orientation of its land border and thus head out in a line towards the southeast.

But Kenya says its boundary runs in a straight line east -- a delineation that would give it a big triangular slice of the sea.

Nairobi says it has exercised sovereignty over the area since 1979 when it proclaimed the limits of its exclusive economic zone (EEZ) -- a maritime territory extending up to 200 nautical miles offshore where a state has the right to exploit resources.

Established after World War II, the ICJ rules in disputes between UN member states. Its decisions are binding and cannot be appealed.

Kenya unsuccessfully argued that the court did not have competence over the case, and in March did not attend hearings, citing difficulties arising from the coronavirus pandemic.

Just over two weeks ago, Nairobi notified the UN secretary-general that it was withdrawing its 1965 declaration accepting the ICJ's compulsory jurisdiction.

"The delivery of the judgment will be the culmination of a flawed judicial process that Kenya has had reservations with, and withdrawn from," the Kenyan foreign ministry said last week.

It accused the court of "obvious and inherent bias" in addressing the dispute.

"As a sovereign nation, Kenya shall no longer be subjected to an international court or tribunal without its express consent."

Somalia and Kenya had agreed in 2009 to settle the squabble through bilateral negotiations.

Two meetings were held in 2014, but little progress was made. A third-round that same year fell through when the Kenyan delegation failed to show up without informing their counterparts, later citing security concerns.

Somalia then took the matter to the ICJ in 2014, saying diplomatic attempts to resolve the row had led nowhere.

Monday's verdict may further sour diplomatic relations between the two countries after Kenya in 2019 recalled its ambassador in Mogadishu after accusing Somalia of selling off oil and gas blocks in the contested area.

Nairobi called the move an "unparalleled affront and illegal grab" at its resources.

It tartly reminded Somalia of Kenya's sacrifices in the battle against Al-Shabaab jihadists.

Kenya is a major contributor of troops to AMISOM, an African Union military operation fighting Al-Qaeda-linked fighters waging a violent insurgency across Somalia.