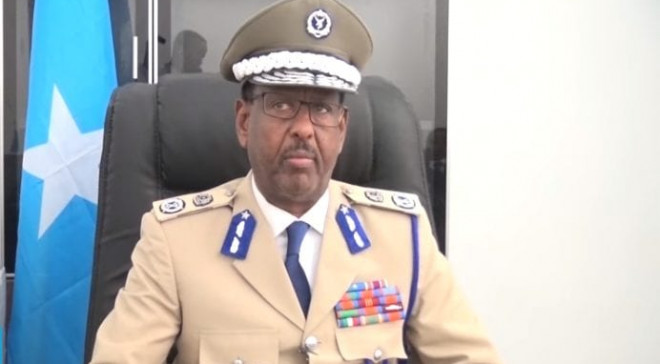 MOGADISHU, Somalia - The Somali Police Force has an obligation of treating all Somalis equally without any discrimination, a senior police commander has warned amid ongoing tussles over elections in the Horn of Africa nation, which is facing serious political challenges.

General Abdi Hassan Mohamed Hijar, the Commander Somali Police Force, said the officers have an obligation of protecting people and properties without discrimination, adding that it's their duty to act within various laws of the country.

His announcement comes amid claims of bias within the security sector in Somalia, which has been facing challenges for as many decades. The country is under a serious security rebuilding process under the supervision of the African Union.

Gen Hijaar said all police officers should remain committed to the course but did not give a hint of what may happen to those who might veer off the directive. Security forces have often been accused of targeting politicians allied to the opposition.

"Somalia’s Police Chief, Major General, Gen Hijaar, has commanded all police forces to stay within their role of keeping the security and protecting citizens and their properties," state media reported, in a statement that gives a glimpse of disorganization in the police force.

A study was done by the Heritage Institute of Policy Studies [HIPS] recently poked holes in various challenges facing the security sector in Somalia. Clanism, nepotism, and general maladministration were stated as some of the serious issues facing the force.

The commander's statement comes at a time of turmoil in the Somali Police Force. Police forces, like the SNA Force, are divided into two factions, a move that threatens national integration and gains made in bringing peace and stability in Somalia.

Farmajo has often been accused of using the police to met violence against his opponents, a claim he has often refuted. The country is yet to go to an election despite the expiry of President Farmaajo's tenure.