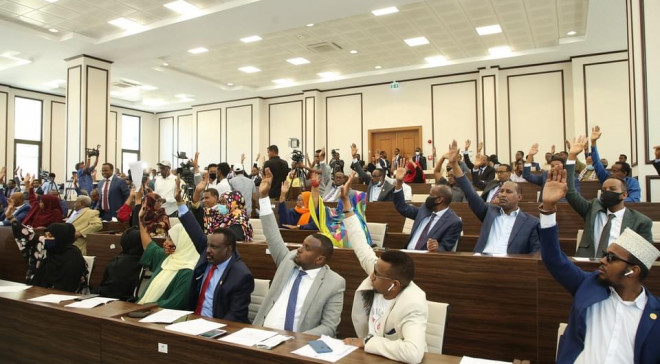 MOGADISHU, Somalia | The United States has welcomed President Mohamed Abdullahi Farmajo's decision to cancel term extension, a move which had divided the country's politicians, given that he had been scheduled to face an election in the country.

Farmajo, who was first elected in 2017, was set to leave office on February 8 and subsequently, face an election, but the process had been delayed due to issues facing September 17 pre-election deal, that had not been concluded by the authorities.

On Saturday, Farmajo rescinded his decision through the Lower House, which had extended his term without following the due process. Lower House is believed to be enjoying a lot of power in the country given that it's the house of people.

And on Saturday, State Department welcomed the decision by Farmajo to accept to implement September pre-election deal, adding that the agreement will steer the country towards a free, fair, and credible election in as many years.

"The United States welcomes the actions taken today by President Farmaajo and Parliament’s House of the People to return formally to the September 17, 2020, election agreement," the US said.  "We commend the President’s announcement that Prime Minister Roble will lead the Federal Government’s efforts to finalize the agreement and oversee implementation of the electoral process, including security arrangements."

'We call on the parties to the agreement to meet immediately without preconditions to finalize electoral arrangements and begin implementation collaboratively and transparently.  The United States stands ready to support the conduct of elections as soon as possible."

The US is one of the major security and development stakeholders in the Horn of Africa nation and has been very keen on pushing for the right electoral processes in the country. Somalia plunged into chaos in 1991 after the ouster of military ruler Siad Barre.