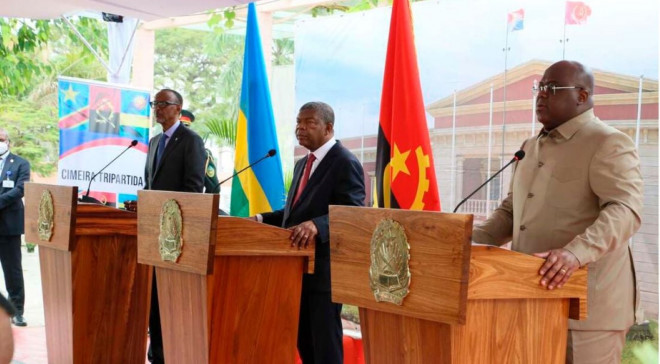 According to a communique from President João Lourenço’s press team, among the Presidents invited for the talk are Paul Kagame of Rwanda and Felix Tshisekedi of the Democratic Republic of Congo.

However, President Kagame had not yet communicated about the Luanda summit. In July the first Luanda summit took place in which a roadmap for the pacification of eastern DRC was designed and agreed upon by Presidents Kagame and Tshisekedi.

Former Kenyan head of state Uhuru Kenyatta is leading the negotiation as the key facilitator of the East African Community (EAC)-led peace efforts, is also expected to attend.

The regional leaders have resolved to harmonize the EAC-led Nairobi process and the Luanda mechanism.

Through the Luanda roadmap, President Lourenço is the mediator between Rwanda and DR Congo, whose relations have soured, following claims by the DRC government that Rwanda supports the M23 rebel group in eastern DRC.

All along Kagame’s government had denied the allegations, instead accusing the Congolese army FARDC of colliding with the FDLR – whose members are accused of genocide crimes in Rwanda –in the ongoing war with M23 rebels.

The Angolan president is the current chair of the International Conference on the Great Lakes Region (ICGLR).

Earlier this month Lourenço held a meeting with Rwandan President Paul Kagame in Kigali and later met with Tshisekedi in Kinshasa.

The three discussed the security crisis in eastern DRC which is the home of over 120 armed groups, that are accused of various cases of abuse.
The EAC resolved to deploy troops to the restive region.

Kenya has already deployed 900 troops and Burundian and Ugandan contingents are set to arrive soon.