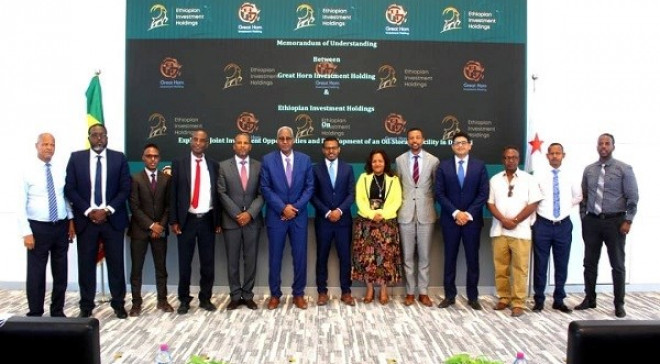 Ethiopia and Djibouti signed a Memorandum of Understanding (MoU) to explore joint opportunities for the development of an oil storage facility in Djibouti’s Damerjog Industrial Park.

According to the Ministry of Foreign Affairs, the MoU intends to create a conducive environment for future joint development of oil storage terminals in Djibouti which will ultimately take the existing well-founded strong economic ties between the two sisterly countries to a higher level.

To this end, it envisages several collaborative mechanisms to set up an oil storage facility in Damerjog to provide storage services to petroleum products destined for the gateway demand of both Djibouti’s and Ethiopia’s markets as well as Transshipment.

The signature of the MOU was attended by State Minister for Foreign Affairs of Ethiopia Ambassador Birtukan Ayano and Ethiopian Ambassador to Djibouti Berhanu Tsegaye.

During the signing ceremony of the document, the high-level officials of both countries underscored that the new initiative is critically important to ensure a sustainable oil supply to Ethiopia’s oil demand which roughly increases by 10 percent every year.