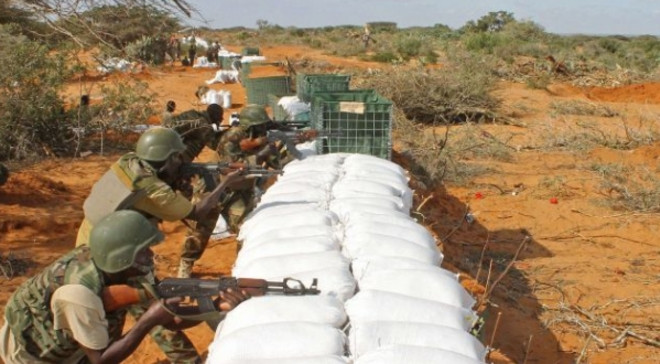 MOGADISHU, Somalia - Al-Shabaab militants over the weekend allegedly raided two strategic Forward Operating Bases [FOBs] manned by the African Union Transition Mission in Somalia [ATMIS] troops, the group's media has claimed, in what comes amid a heightened crackdown against the militants.

The Somali National Army [SNA] has been at loggerheads with the militants and the invaluable support from ATMIS, the US Africa Command, and local militia has significantly increased the stakes, helping the national army to liberate strategic towns across the Horn of Africa nation.

According to reports, the militants attacked a Kenya Defense Forces [KDF] camp in Hosingow within Lower Jubba. The Forward Operating Base is under the Sector II of ATMIS whose main headquarters are in Dhobley town, Southwestern part of the country.

The second raid, the militants claimed, targeted the Ethiopian National Defense Forces [ENDF] within Waajid town in Southwest, a state which is prone to Al-Shabaab attacks. In either case, the Al-Shabaab did not give the number of casualties but maintained that sections of the bases were destroyed.

Garowe Online could not independently verify the claims but on previous occasions, the militants have attempted to carry out attacks on military bases when they are under siege. Efforts to get comments from the KDF were futile given their structured communication strategies on matters regarding war.

While KDF has often confirmed attacks on their respective bases in Somalia, their ENDF counterparts are a bit secretive and rarely share information with regard to their operations including updating the public on gains made in the Al-Shabaab war. They are mainly in Sectors II and VI.

KDF suffered setbacks in 2016 when the militants raided El-Adde Forward Operating Base, killing over 200 soldiers, and in the following year [2017], the team lost 73 soldiers at Kulbiyow. However, the team has managed to make significant gains, including liberating Kismayo, the regional administrative capital of Jubaland.

The group also reported similar attacks in Aymiska area, outside Mogadishu; and detonating a roadside IED on a military convoy between Baidoa and Daynunay, SW, injuring two people. Across the country, it has suffered major losses including losing grip of various towns and villages where they have been collecting revenue.

For instance, on Monday, the Somali ah killed Ahmed Morogabey and Ali Garweyne in an operation conducted at Dhurshen Shabelle under Elbarde town of Bakool region.

During the operation, the army destroyed the outpost where terrorists extort money from people which they use to run their clandestine activities.