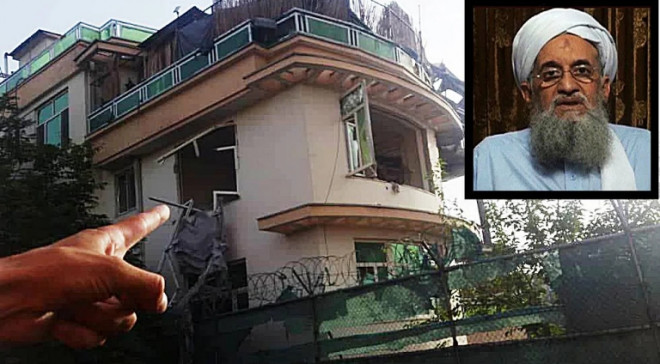 KABUL, Afghanistan - It took several months for Central Intelligence Agency [CIA] sleuths to locate, monitor, and eventually eliminate the most wanted Al-Qaida leader Ayman al-Zawahiri, an Egyptian physician who took over from Osman bin Laden, who was killed over 11 years ago CBS news reports.

At the time of his death, the CIA used two Hellfire missiles to target his safehouse balcony in the wealthy neighborhoods of Kabul, the capital of Afghanistan, a country that the US abandoned following the takeover by Taliban rebels a few months ago.

Senior administration officials said al-Zawahiri was killed on Sunday morning when the missiles were fired using a drone or probably an aerial vehicle, ending his life instantly on the balcony, just like his predecessor who was killed by the Navy Seal.

The nature of the strike as described by a senior administration official signals that the U.S. may have used the R9X Hellfire variant, also known as the "Ninja" or "Flying Ginsu" missile, nicknamed for knives famously sold on TV in the 1980s. This variant has been used in the recent past to kill other extremist leaders.

According to experts, the R9X Hellfire has six sharp blades which have a capacity of rotating at a very high speed and deployment before causing impact as opposed to conventional warhead explosives. This was confirmed by one Janes, a defense intelligence provider.

The missile pierces and cuts its target, rather than blowing it up. The design makes it easier to take out an intended target while lessening the likelihood of causing additional casualties, the defense intelligence provider told CBS news.

The White House has not shared details about the type of Hellfire missiles used. A reporter asked a senior administration official on a call Monday about the nature of the missile, but the official did not answer.

According to the senior official who did not give further details about the operation, the strike only killed al-Zawahiri, avoiding civilian casualties and the strike did not completely destroy the safehouse where al-Zawahiri was hiding with his family.

It is unclear whether the missiles inflicted structural damage beyond the patio. Two intelligence sources familiar with the matter said the CIA carried out the strike.

Hellfire missiles are air-to-surface missiles initially designed for anti-armor strikes, but later versions have been used for precision drone strikes. The arms manufacturer Lockheed Martin developed the missiles with the name "Heliborne, Laser, Fire, and Forget Missile," which evolved into the Hellfire missile, as it is now known, CBS further reported.

The R9X variant was initially deployed in secret in 2017, according to a U.S. Army equipment guide, and was used to kill Abu Khayr al-Masri, a member of al Qaeda's leadership.

Photos of the aftermath on social media showed the car where al-Masri was purportedly killed as having damage to the passenger compartment of the beige Kia sedan but no damage to the engine block. The roof was blown open on the right side of the vehicle.

There were unconfirmed reports that al Qaeda deputy leader Abdullah Muhammad Rajab Abdulrahman, aka Abu al-Khayr al-Masri, was killed in the strike.

The Hellfire variant became public knowledge after it was used in 2019 to take out Jamal Ahmad Mohammad Al-Badawi, who was behind the 2000 USS Cole Bombing.

Al-Qaida is the parent group of Al-Shabaab, a terror group that has destabilized Somalia for over a decade, killing thousands of people including senior government officials, military officers, and even thousands of innocent civilians.

On Tuesday, the Prime Minister of the federal republic of Somalia Hamza Abdi Barre appointed former Al-Shabaab deputy leader Mukhtar Robow to the cabinet as the minister for Endowment and Religious Affairs. This is viewed as a strategy to fight the group ideologically.