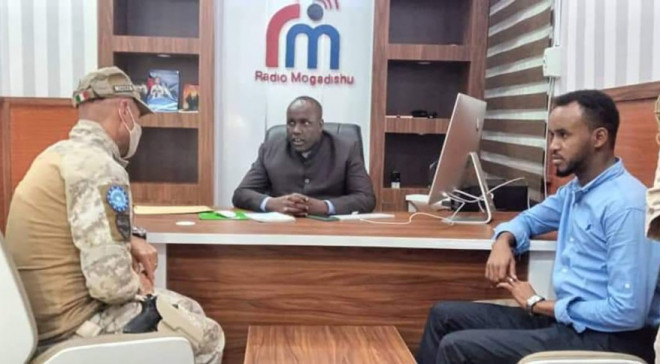 MOGADISHU, Somalia - The Federal Government of Somalia [FGS] is now under pressure to investigate the killing of a Radio Mogadishu journalist who was killed by people believed to be Al-Shabaab militants last week in the Somali capital.

The Committee to Protect Journalists [CPJ] now wants the death of Abdiaziz Guled Afrika to be investigated, despite the fact that Al-Shabaab militants claimed responsibility for the brutal attack which also left another writer badly wounded.

According to CPJ, the circumstances surrounding the killing of Afrika raised suspicions noting the matter must be a full investigation. Al-Shabaab did not give reasons behind the death.

"A thorough and transparent investigation into the attack that killed Abdiaziz Mohamud Guled and injured Sharmarke Mohamed Warsame and Abdukadir Abdullahi Nur is critical for authorities to signal that they are serious about reversing the impunity that prevails in journalists’ killings in Somalia,” CPJ Africa programme coordinator Angela Quintal said.

Former National Intelligence Security Agency [NISA] director-general Ahmed Fiqi claimed that the journalist's murder was planned by Al-Shabaab and some other actors, but did not give many details to support his claims.

Afrika died after the vehicle he was in with SNTV colleague Sharmarke Mohamed Warsame and driver Abdukadir Abdullahi Nur blew up in Bondheere district in Mogadishu. A suicide bomber reportedly jumped into the vehicle and exploded killing the journalist instantly.

For years, Afrika had been producing Gungaar programme on SNTV which featured ex-Al-Shabaab and ISIS militants. The television is run by the federal government of Somalia and Al-Shabaab is said to have been angered by his programme.