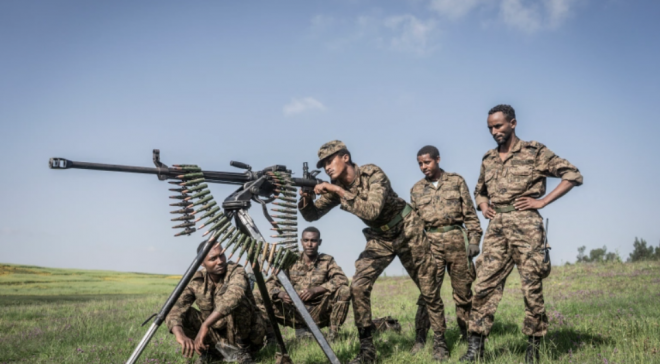 ADDIS ABABA - The Ethiopia National Defense Forces [ENDF] have reportedly killed senior Al-Shabaab commanders just near the border with Somalia, in the latest crackdown which comes moments after the militants crossed over to the Horn of Africa nation.

In a statement, the Ethiopian authorities said the army killed three Al-Shabaab senior leaders in South Eastern part of the country, during an offensive which was waged against the militants have tried to cross over to the Ethiopian side of the border.

The Ethiopian forces and troops from the Somali region killed Fu'ad Mohamed alias Sonqole and two other leaders who have been on the US radar for a long time. Earlier this week, it was reported that Sanqole was around Aato town where he was radicalizing locals.

Also reportedly killed in the crackdown by Ethiopian troops were Abdulaziz Abu Musa [Al-Shabaab spokesman], and Ubeda Nur Isse who is said to be head of Al-Shabaab forces along the Ethiopian border. The militants had tried to attack people at Aato town on Friday morning.

Records in the State Department indicate that Sanqole had a $5 million bounty on his head with the US accusing him of recruiting Al-Shabaab militants. The cleric is said to be having Swedish citizenship and has been successfully avoiding arrest.

Major General Tesfaye Ayalew, Head of the deployment in the Ethiopian Defense Force and coordinator of the Security Command Post, has confirmed to Ethiopian State media, Ethiopian News Agency, that the three Al-Shabab leaders are killed near the Ethiopian border.

Last week, Al-Shabaab militants suffered multiple losses at Aato and Yeed towns along the border of Somalia and Ethiopia. Further reports indicate that Al-Shabaab was killed in numbers within Ethiopia, with authorities estimating the number at over 100 militants.

It is unclear if there were casualties from the Ethiopian forces. The report on the death of Sanqole could not be independently verified by Garowe Online but there were confrontations along the border, with the latest gunfight reported on Saturday morning.

Mustafa Mohammed, president of the Somali regional State of Ethiopia, on Thursday, warned that Al-Shabab might attempt to launch a new attack despite devastating defeat in the same week. Al-Shabaab controls huge swathes of rural central and southern Somalia.